It’s that time again, no it’s not Christmas, it’s Hanukkah!

Hanukkah is not Jewish Christmas.  According to ChaBad.org Hanukkah,  also known as the Festival of Lights, is a Jewish festival commemorating the recovery of Jerusalem and the subsequent rededication of the Second Temple at the beginning of the Maccabean Revolt against the Seleucid Empire in the 2nd century BCE.

Hanukkah begins on the 25th day of the Hebrew month of Kislev, which usually takes place in December. In 2021, Hanukkah runs from November 28 to December 6.

To mark the holiday, those who participate light one candle each evening on a nine-branched menorah. The ninth candle – the shamash, (“helper” or “attendant”)  is used to light the other eight.

The lit menorahs are displayed often in windows. Playing with tops called dreidels and exchanging gifts are other Hanukkah traditions to celebrate the holiday.

Many of your favorite celebrities are Jewish Seth Rogan, Adam Sandler, and Andy Samberg just to mention a few.

US Vice President Kamala Harris and her husband, Doug Emhoff, are some of many who participate in Hanukkah. They lit candles for the first night of Hanukkah at the vice president’s residence in Washington on Sunday evening.

“From our family to yours, Happy Hanukkah,” tweeted Emhoff, who is Jewish, from his official “Second Gentleman” Twitter account, in a post that was then shared by Harris. 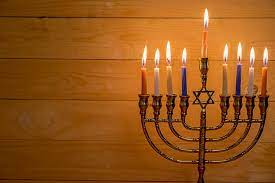