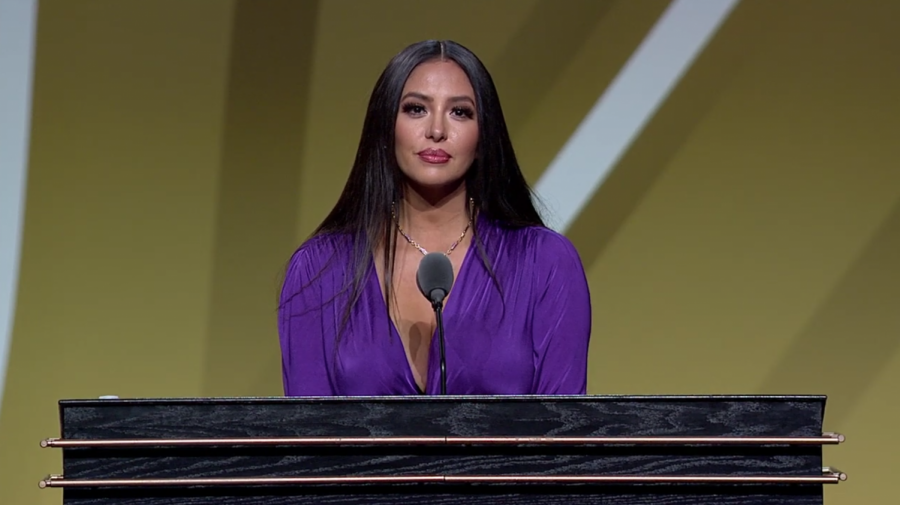 The exhibit includes game-worn shoes, jerseys, and championship rings. Kobe Bryant’s short film, “Dear Basketball,” will be playing in the exhibit. This film won an Oscar for Best Animated Short Film in 2017 and made him the first professional athlete to win an Oscar.

Kobe Bryant is the first player since Michael Jordan, to have his own individual exhibit at the Hall of fame.

The crowd watched Kobe’s career highlights in silence. Kobe won five NBA championships, made 18-All Star appearances, and a total of 33, 643 points. The Hall of Fame highlighted legendary NBA players including Tim Duncan and Kevin Garnett.

Michael Jordan, who spoke at Kobe Bryant’s services, also presented the award and walked Vanessa Bryant on stage. He stood by her side as she spoke and said, “If my husband were here tonight, he’d have a long list of people to thank that helped inspire him and equip him to be in the Hall of Fame — family, friends, mentors, the Lakers, teammates, muses and opponents. This is one of the many hard parts about not having him here. At the risk of leaving anyone out, I can only say thank you, To all those who helped him get here, you know who you are, and I thank you on his behalf. I don’t have a speech prepared by my husband because he winged every single speech. He was intelligent, eloquent, and gifted at many things, including public speaking.”

Kobe’s legacy will live on through the people he mentored, inspired, and coached. He learned from his own mistakes, he played with injuries, because he wanted to be the greatest he could be. He taught his fans not only about basketball but life. People will always remember Kobe and will forever be inspired by the man he was.