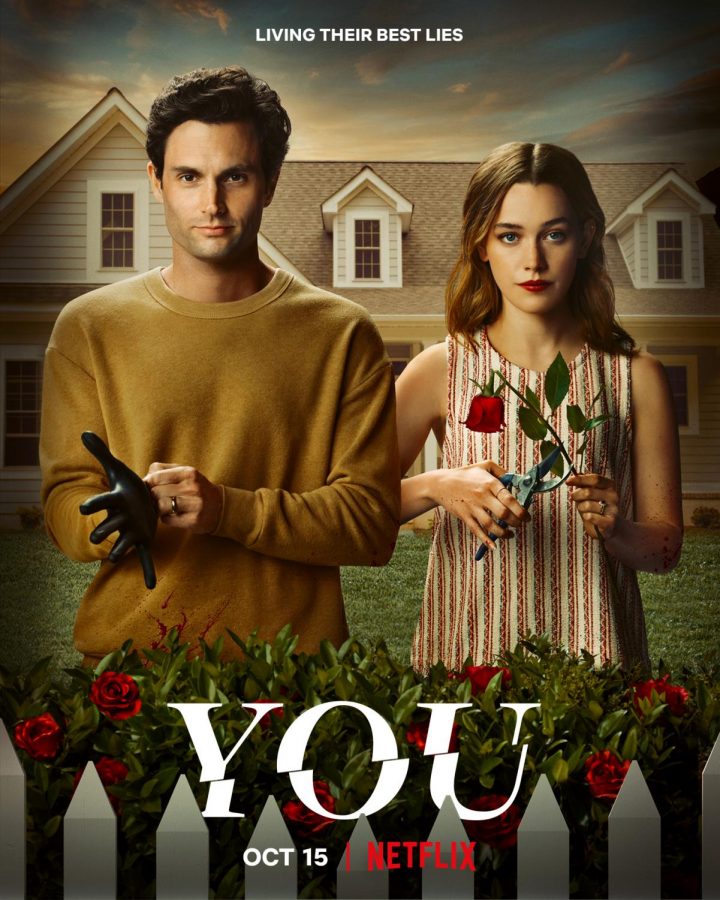 The last time we saw the main characters, Joe and Love were at the end of season two as they figured out they had love to kill.

Season three is set in a fictional town based in the Bay area, a completely different aura from the previous seasons that are set in New York and Los Angeles.

I loved the new additions to the series, Shalita Grant and Travis Van Winkle as Sherry and Carey Conrad, the neighbors who seem to run the suburbs. At first, I could not seem to wrap my head around these characters but they definitely grew on me.

Before watching it, I had my doubts. I truly thought it was going to be the worst season because Netflix tends to create shows that stretch the storyline.

I was completely wrong. Most shows decline in quality after the first season but “You” gets better and better each season.

If a walking liability was a person it would be Love, as she murdered half of her town. Through it all, Love made Joe, out of all people, seem reasonable. The toxic connection they had explained why they were so perfect together, well until they weren’t.

This season was a major self-discovery experience for Joe; he is finally understanding his actions come from an underlying trauma of “mommy issues.” As a new parent, Joe contemplates his murderous actions for his son Henry. The constant hold back is Henry, although both Joe and Love take Henry to murder scenes.

Although the show is a murder drama, I found myself laughing at Joe’s inner monologue.

Throughout the season he demonstrates his dry humor and includes dad jokes.

I will give this season a 7 out of 10. I think that this season was the best one yet. I still don’t like how we are still left with unanswered questions from seasons prior. A continuous default is how predictable this season finale was. Netflix announced prior to the third season release that the fourth season is already in production. So it was obvious that Joe was going to do something that will continue into the next season.

The ending was well played. This season is a perfect example of toxic relationships, but I was happy to see Love gone. Everything that happened this season was Love’s fault and she always finds a way to pin it on Joe. She murders very carelessly and puts not only herself in danger but her family.

I am excited for Joe to continue his murdering spree in Paris in season four.