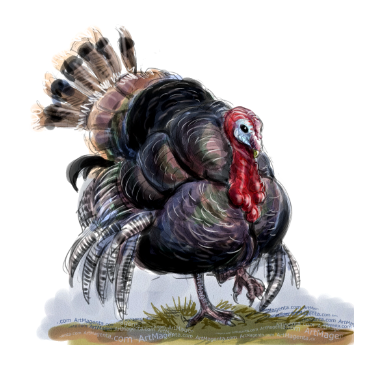 Turkey. The bird that is served as the main course of the meal in many homes on Thanksgiving day. It is probably one of Thanksgiving’s most recognizable symbols.

But why is it that we serve turkey at Thanksgiving and not chicken or even beef?

When Thanksgiving happened around 1621, the food that was served was venison, seafood, chicken, onions, lettuce, peas, carrots, beans, cabbage, corn, and turkey. It is believed that there were about 10 million turkeys in the Americas when the Europeans were around, so they were in abundance.

Turkeys were larger than chickens and more plentiful during the time of the first Thanksgiving. They offered more meat than chicken and were more available at the time. While the average turkey grew to about 5.5-24 pounds, the average chicken only grew to 4-15 pounds.

Today, Turkey has mainly continued to be served on Thanksgiving simply because they were abundant in the northeast area where the native Indians and pilgrims had their Thanksgiving.

Therefore, Turkey has become a traditional dish on Thanksgiving.