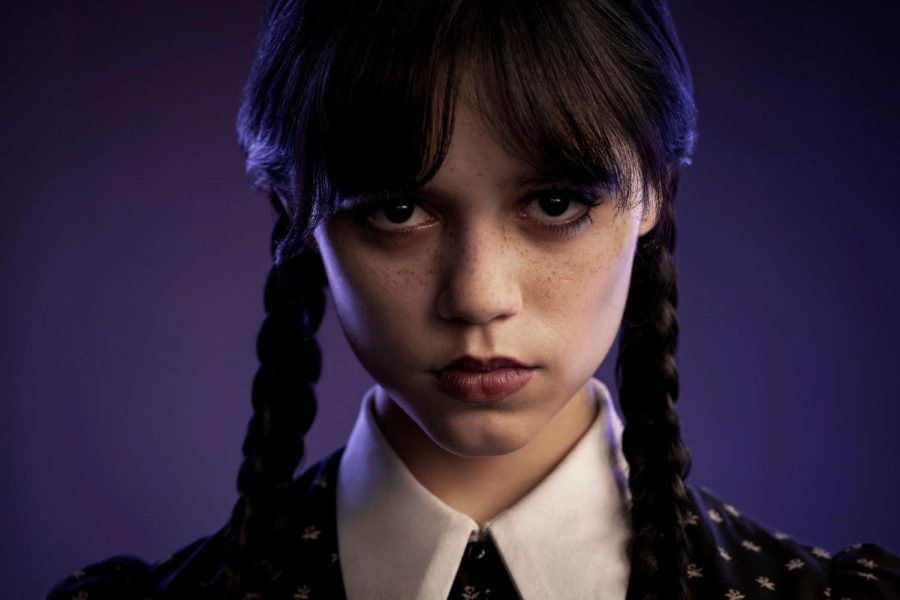 The newest Netflix show “Wednesday” starring Jenna Ortega was released on Netflix on November 23rd. Inspired by the 1990s Addams Family movies and comics from the 1960s, it quickly grew in popularity, becoming one of the most popular shows on Netflix almost as soon as it came out.

The show follows Wednesday Addams’s life as a teenager as she is forced to attend Nevermore Academy, a school for outcasts and supernatural kids that her parents attended.

Ortega is such a well-respected and beloved actress, known for her roles in Disney’s “Stuck in the Middle” and Ti West’s “X,” so many fans were excited to see her being involved in such a fun project with the famous filmmaker and artist Tim Burton as director.

Many other popular actors were also involved, including Catherine Zeta-Jones as Morticia Addams, Luis Guzmán as Gomez Addams, and Christina Ricci as Marilyn Thornhill. Fans were ecstatic to see that Christina Ricci had a role as a teacher at Nevermore Academy because she played Wednesday Addams as a little girl in the 1990’s Addams Family movies.

The show does a great job at showing the complexity of Wednesday Addams and stays true to the peculiar behaviors that she is adored for. It emphasizes the idea that Wednesday thinks differently from others and reveals some of her cruel ways of thinking while still being able to show that she does in fact have a soft side.

Wednesday is introduced to love interests, friendships, and mystery conflicts that help further her growth as a character and reveals more about her personality that simply was not explored in earlier films. The adaptation into a TV series gives more time to focus on Wednesday rather than the Addams Family at large.

In the earlier movies, her family dynamic was shown to be strange but perfect in ways, with her family always staying together and almost never bickering. In the new show, they make an excellent decision to show Wednesday’s character development that took place off-screen and encourages the idea that family can get complicated when becoming a teenager. It gives a different feel and perspective than the movies originally did and it quickly hints at the idea that the show will have different values.

Overall, the show is very promising, giving a fresh new take on the Addams Family, and helping us further explore and understand the characters. The director and actors for this show are a bonus and the plot has given so much in one season while still being able to open up so much more in future seasons.

“Wednesday” has not been officially renewed for a season 2 yet, but with season 1 being left on a cliffhanger and with the tremendous popularity being received, it is almost guaranteed.