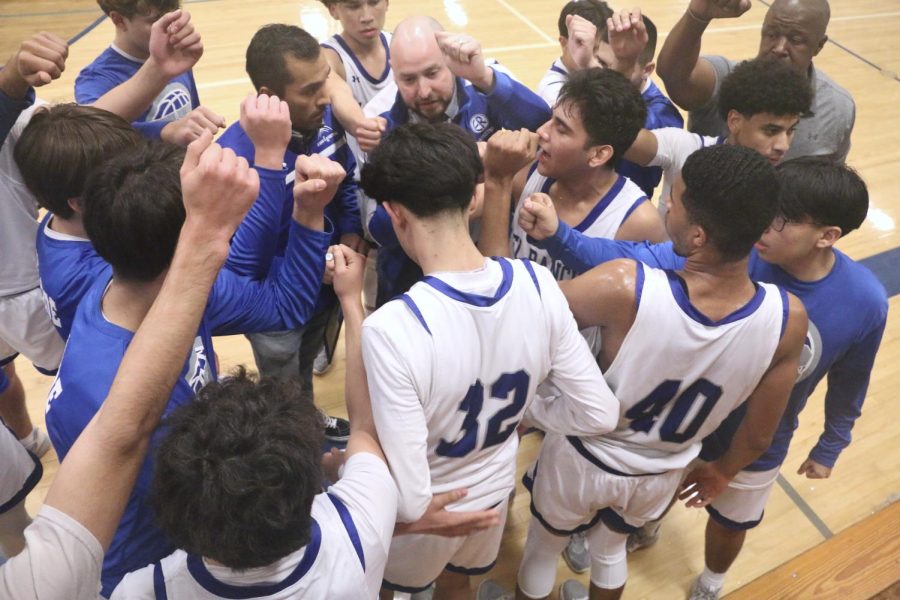 Coach Porter, Sanchez, and Moore rally the boys together.

They own the new gym during first period and on the court at night. The El Rancho boys basketball team has risen from the ashes and is here to light a fire in Del Rio league.

Coach Porter, the varsity basketball coach, has assembled a fantastic team of coaches to work year-round since the beginning of spring 2022 including, Mr. Matt Sanchez, Mr. Everett Moore, Mr. Eddie Bravo, Mr. Hector Arevalo, and Mr. Abraham Ramirez. This year they have a record of 14-10 and the season hasn’t even finished.

Their coaching style and scheduling are a big part of this newfound success. As head varsity coach, Porter brought the ideas he learned as JV Girls Basketball coach under girls Varsity head Coach Shigezane. The first change was implementing year-round practice and games for the boys.

“We have had more opportunities to develop team chemistry overall,” said captain Daniel Lemus, “We worked on our skills more and learned how to just play basketball and not play like a robot.” It is true, practice does indeed make perfect.

Not only does practice make or break a team, but so does the coach. Porter is someone you won’t see without a few students saying hello or talking to him. Senior George Hurtado said, “He’s been a great mentor and coach to us by helping us with schoolwork and overall giving us a different perspective on basketball itself.”

The next big change was having basketball find its home in first period. Sports have always been during sixth period at El Rancho, but being unconventional wasn’t a big deal to them. The team practices on Saturdays, showing great commitment to their goals.

Although they have to wake up earlier than most students with the new 8:30 school schedule, there are some benefits. Without practices that last until 5:30, the boys can work on homework or just get some well-earned sleep.

All this work might seem scary and stressful, but the boys love it. Captain Anthony Echeverria said, “we have built a culture.” This culture consists of having team dinners before league games and slapping Gabriel Apodaca’s back in the locker room.

Before games when it’s time to get in the zone, Derek Sicairos is the one to get them going. Lemus said, “Derek has been the best at rallying the team together because he doesn’t talk much, so when he talks, everyone listens.” Not only is it a mark of their chemistry but also of the respect they have for each other.

Watching the games, you can see the excitement each player has for basketball and working together. Every time someone subs out, they are greeted with high-fives down the row of players on the bench. Whenever someone scores, no one is left in their seat. Their joy is palpable and contagious.

Hoping to continue that joy, the team plans to win Del Rio League and head into CIF. To get to those aspirations, support is needed outside of their bubble.

Every team needs its supporters, and senior team manager Antonia Urias is the El Rancho Boys Basketball’s number one supporter.

Urias brought a new face to the Basketball team by introducing a consistent stream of Instagram posts of game plays and announcements for the games. “I think it was important for me to fix the Instagram account because I believe the boys needed more recognition for how much they improved this year,” Urias said. Their Instagram followers grew from 120 to 724 from the spring of 2022 to the winter of 2023.

Urias has been a part of the team since her junior year. Her cooperation with the coaches allows for their content to be genuine and exciting for each team member. “Each coach trusts my intuition and values what I bring to the program,” said Urias, “As well as the team, they have all been nothing but nice to give me their feedback and show thanks for what I have done for them.”

Her hard work has paid off. More students and El Rancho community members gather in the main gym to watch the boys play. “Before everyone in the school, including me, believed the boys to not be as good as compared to the other teams we played. But now, thanks to social media, people’s points of view have changed,” Urias said. She records videos to highlight the growth of the players, whether they are shooting three-pointers or running fast breaks.

Even with all their popularity, Urias is always thinking of more to do. Along with advertising games, she has created a “spirit crew” to do stats for the games and assist her collaborations with ASB to create themes for home games. She plans to do more one-on-one videos with players and team bonding outside the court.

The players love the attention. The support is exciting and drives them to keep playing better each time. But as Lemus said, “We don’t let the attention get to our heads.”